Is Royaltiz The Next FTX? Caroline Garcia is an amazing tennis player. The Lyonnaise won November’s WTA Finals, capping a year that saw her rise all the way from 142nd in the world to number 4.

So it caught my attention just after Christmas when I saw that Garcia was shilling for something called royaltiz. At first glance, I couldn’t tell if this was supposed to be the next big thing in sports gambling, if it was simply a bad idea to separate people from their money, or potentially the next FTX. 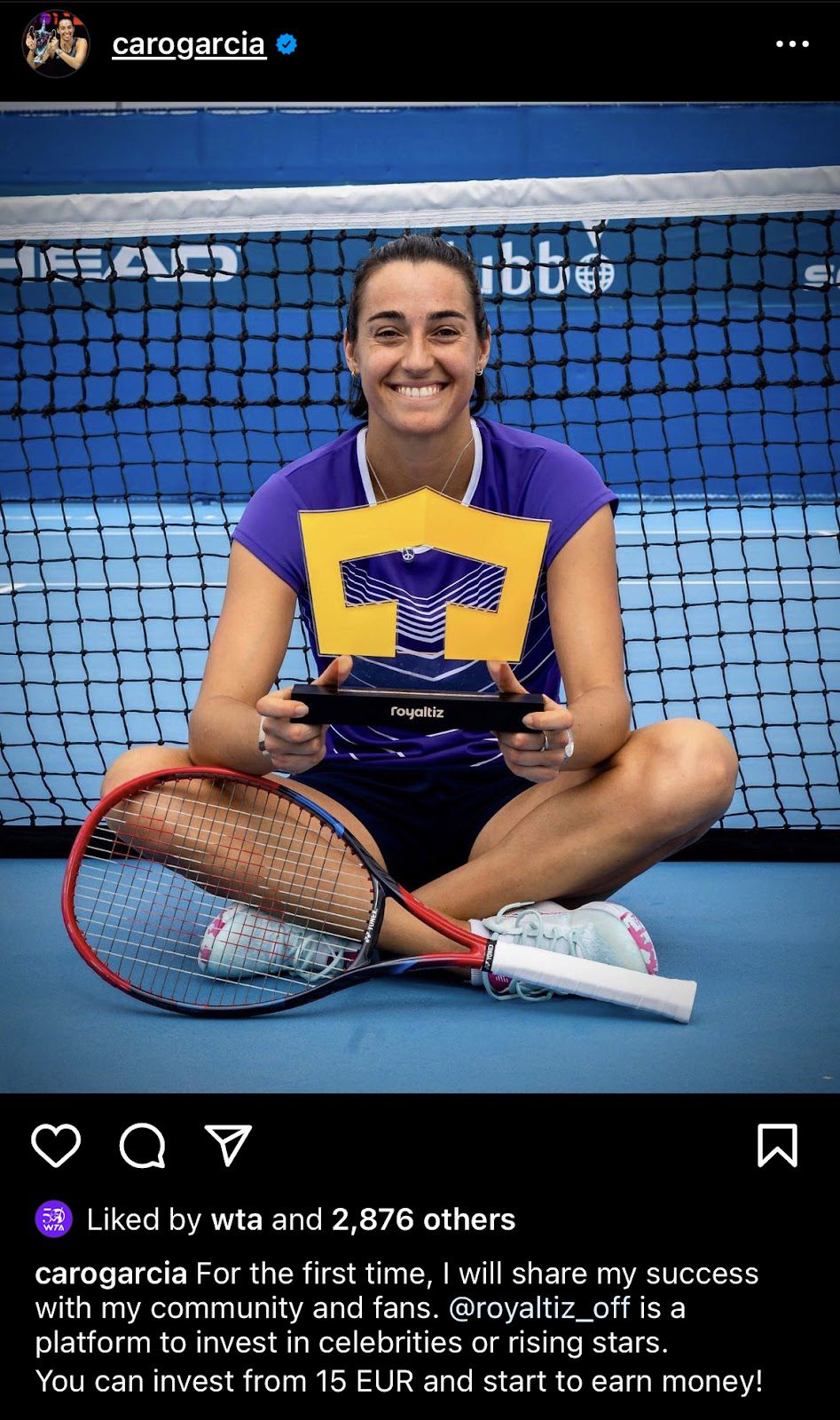 As they indicate on their LinkedIn profile, royaltiz was founded in 2021 and says they’re “the only platform where you can invest and share the financial success of talented people through ROY tokens! We are building the exchange for talents like sports players, artists, entrepreneurs, content creators.”

Yet the business model is very much gambling on something difficult to understand.

You can sign up for a royaltiz account and buy a talent token – let’s say in Caroline Garcia. The value of the token is tied to Garcia’s performance. If she does well on the court (I also assume but don’t know if this ties on to off-court revenue such as successful endorsement contracts) you can make money through dividends on your token.

It all feels suspect when viewed through the lens of any traditional type of investment, which this clearly isn’t.

For those who are very comfortable with crypto tokens and NFTs, they will probably have a comfort level with this. The notion is that you can win on royaltiz buy acquiring the token – known as ROY – at the lowest price possible. Then you sell high.

“So, sell at the right time to boost your revenues!”

In Garcia’s own case, as of the first week of January, she was not yet officially on the platform but her token was coming soon.

So if we go back to Garcia as an example, had this token been around in late 2021, when Garcia was ranked 142nd in the world, and you sold the token right after she won the WTA finals in November 2022 and was ranked 4th in the world, you’d do well.

Exactly how you’d do well isn’t that easy to figure out: “The price evolution is based on supply and demand between users,” which sounds like any NFT, really. Specifically, what you would own on the royaltiz platform is a “Collector Roy,” which royaltiz defined as “a non-fungible digital asset” in their terms of use.

I interviewed criminal law attorney Michele Finizio, who observed that “People buying these tokens should see this as a form of entertainment rather than an actual way to make money from an investment. Only use money you can absolutely afford to lose and, as you should do with any new platform or scheme, use very little money.”

This is a platform that won’t go away soon. It is financially backed by a range of sports and non-sports investors, including Allianz Group, the European insurance giant, which was involved in an 8 million Euro investment round in June.

The leadership team is French, which explains why the first athletes on the site are French. The corporate structure of Manse, the parent company of the royaltiz platform, is, as per their terms of service, a simplified joint stock company – registered in Paris.

Top athletes need to ask themselves if this is all worth it in light of pending FTX litigation. With the likes of Tom Brady and Naomi Osaka facing potential legal liability for promoting FTX, what are the percentage chances that this works out well for athletes and influencers promoting royaltiz?

What this all comes down to is faith in a very weird and abstract way. Back to Caroline Garcia. If you hold her token on royaltiz the way you would potentially make money is by buying the token when it’s low (one assumes that this would be now, as she’s just starting on the platform). Then if she has a great beginning of the 2023 tennis season, others would want to own her token and pay you more for the tokens of hers that you have.

It’s all the same kind of grand fiction as any other non-fungible digital asset. The value comes from your belief in it. If you buy a non-fungible token of a bored ape in the morning and a lot of people want to own it that night or next week, you make money.

As to how royaltiz makes money as a platform, it’s on a transaction fee basis, and not all users are thrilled, as highlighted in this Reddit post:

“I literally lost money doing this offer and so did the friends I referred. To purchase a NFT it costs 1.3£ (cheapest) and the transaction fee is literally the same as the price of the cheapest NFT. So that totals to 2.6£. The reward I’ve received is 1.3£ NFT card and as of 2 days ago I am still waiting for someone to buy my reward & the card I bought to get my money back.. Not to mention that I deposited 15£ and I am still awaiting for the withdrawal of my 12.8£ Anyone else lost money on this offer?”

So the point of celebrity endorsers such as Caroline Garcia is to encourage users and transactions, which is what gets us back into FTX territory. While there will be many FTX lawsuits against celebrities and influencers, what they all have in common is a foundational allegation that FTX was a fraud that promoted unregistered securities. From where I sit, royalties doesn’t feel very different, so

A Pulitzer Prize-nominated writer, Aron Solomon, JD, is the Chief Legal Analyst for Esquire Digital and the Editor-in-Chief for Today’s Esquire. He has taught entrepreneurship at McGill University and the University of Pennsylvania, and was elected to Fastcase 50, recognizing the top 50 legal innovators in the world. Aron has been featured in Forbes, CBS News, CNBC, USA Today, ESPN, TechCrunch, The Hill, BuzzFeed, Fortune, Venture Beat, The Independent, Fortune China, Yahoo!, ABA Journal, Law.com, The Boston Globe, NewsBreak, and many other leading publications.