In holding that Soul Cap does not “fit the natural form of the head” and to the best knowledge of the governing body “the athletes competing at the international events never used, neither require…caps of such size and configuration,” FINA evinced a profound lack of understanding of the needs of a certain group of their competitive athletes.

As reported in The Guardian, the Soul Cap brand formed a partnership with the first Black swimmer to qualify for the Olympics for Great Britain – Alice Dearing – whose hair in no way resembles the type of hair the FINA-approved swim caps were designed to accommodate:

Admittedly, the Soul Cap does not perfectly replicate the swim cap ingrained into our collective consciousness.

Chris Rock brought the reason for this to an international audience in the superb documentary he produced in 2009, entitled Good Hair. He interviewed many people who spoke about the culture of denying and trying to change their “bad hair,” which was their natural Black hair, to the “good hair” of white people.”

This truly outstanding documentary highlighted the life experiences of people ranging from Maya Angelou to the talented impresario, the late Andre Harrell – as well as rapper Eve, and actor Raven-Symoné. Their individual and collective stories of the uniqueness of growing up with Black hair are amplified ten fold by Black swimmers who have historically needed to make their hair fit not only an externally-imposed social construct, but a piece of sport-specific equipment that simply does not function.

As this LinkedIn post from this weekend highlights, the issue with Black hair is neither limited to celebrities nor to athletes:

Indeed, FINA’s refusal to recognize the Soul Cap is a slap in the face for Black swimmers. In a sport that has been overwhelmingly white for ages, only 2% of swimmers are Black in Great Britain. For those thinking that it’s much higher in the United States, you couldn’t be more wrong, as only 1% of 400,000 swimmers registered with USA Swimming are Black.

From a design standpoint, there is no defense to FINA’s decision. As compared with the still-current swim cap designed by Speedo back in the 1950s, there is absolutely no evidence that the Soul Cap provides any comparative or competitive advantage. In actuality, a Soul Cap is far less aerodynamically advantageous as compared with the Speedo cap, which was originally designed to keep thin blonder hair out of the eyes of swimmers. A Speedo cap helps reduce friction, thereby increasing the swimmer’s rate of speed as they move through the water.

Black hair, especially for women athletes, is one source of their history and pride. Not to be allowed a functional and appropriate swim cap is indicative of the long-standing position of both the International Olympic Committee, FINA, and other sport federations, that one-size-fits all will forever be the status quo, as long as that one size everything needs to fit is the size of white athletes.

In response to the FINA decision, the Soul Cap founders released this statement on Instagram:

Social media has weighed into the discussion, with a vocal minority arguing that Black swimmers should all simply cut their hair very short to accommodate the traditional swim cap. These arguments ignore the need for swimming, at all levels from recreational to world championships, to become more inclusive and far more diverse.

In sharing the brand’s origins story this weekend on Twitter, Soul Cap’s founders touch upon the exclusive nature of the sport:

“We both grew up without learning how to swim. We didn’t think it was a sport for us, it wasn’t a thing amongst our friends, and it wasn’t encouraged by our school or parents. In 2017, we decided to finally learn and take on adult swimming lessons together”

In learning how to swim, they met a Black woman who had to resort to splitting swim caps to fit her natural hair. 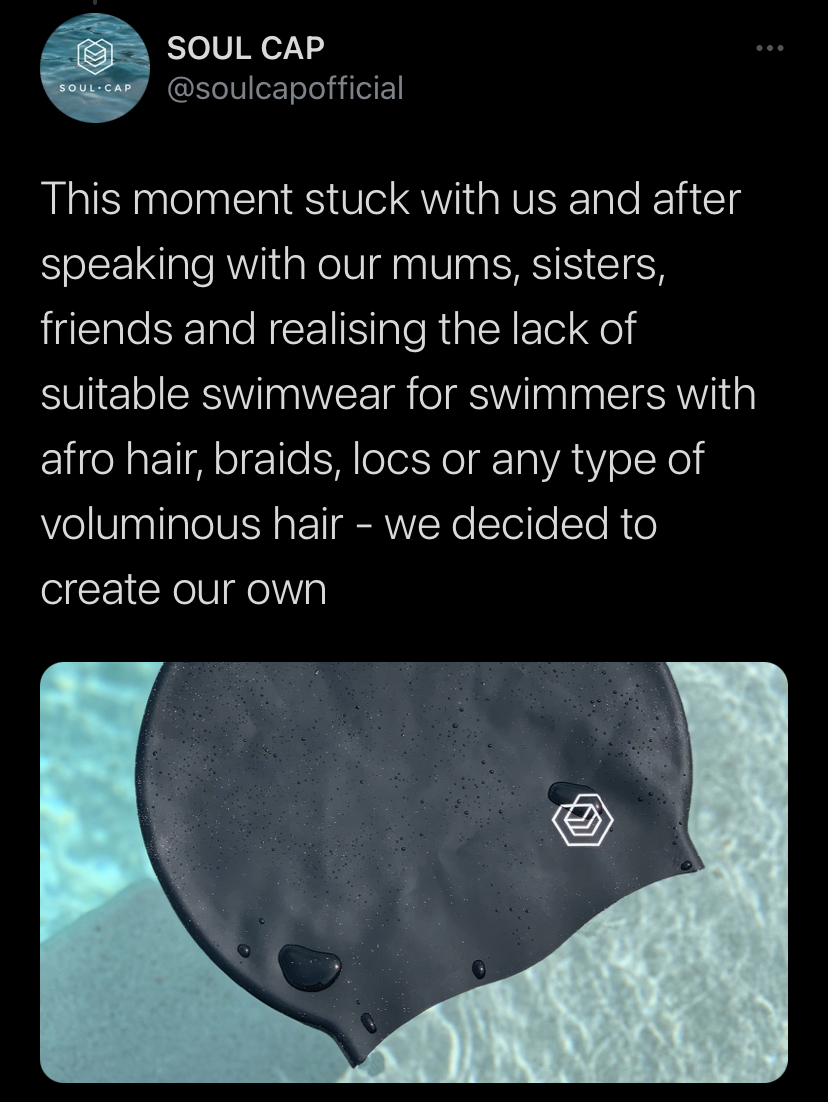 In any sport, equipment is meant to fit the participants. When the natural evolution of equipment design to make a sport inclusive and fair is rejected, sometimes there are reasons that are so obvious they are impossible to ignore.

Attorney Michael Epstein argues that given the FINA decision, athletes may have a legal foundation upon which to base an argument for using Soul Cap or another brand’s equivalent design:

“Where an athlete can show that they have been harmed by not being allowed to use a piece of equipment that provides no advantage and exists only to meet the needs of their race or gender, there may be a basis for a legal challenge.”

When we look at the totality of the Tokyo Olympic Games to date, the Soul Cap debacle is just one more in a seemingly endless series of missteps for an Olympics a growing number of people believe shouldn’t happen.  It is as clear as the light of day that the powers that be would prefer if Black athletes, who clearly present a problem for them, would simply not compete.

And for those who think that these issues in sport aren’t worth fighting, after what can be fairly characterized as a global outcry against FINA’s decision, the organization agreed to review their competition ban on Soul Cap.

Whether or not their decision is ultimately changed, the fact that it was made in the first place reminds us that while the first modern Olympics is 125 years behind us, some days it seems as if it’s not very far in the distance at all.